THE TRUTH ABOUT MILK - WHY DO HUMANS STILL DRINK MILK? 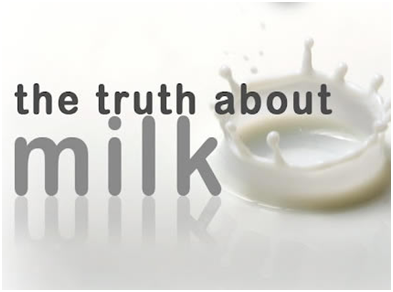 Perhaps because the government tells us to. Today's processed milk is far from healthy and is essentially a dead liquid, devoid of any real nutritional value. Raw milk is a step up in nutrition since it's not put through the violent heating stages of its conventional counterpart and retains the nutrient values that nature intended. However, do we really need to drink any milk of any kind from another species besides our own?

It's a contentious topic, but most people don't stop to think about the fact that humans are the only animals that continue to drink milk after being weaned, and moreover from another animal.
Raw milk drinkers definitely have an edge in the nutrition department as at least they drink a beverage which has the potential to prevent disease. Unlike conventional, pasteurized milk which can cause heart-disease and diabetes, raw milk can actually prevent these conditions. But raw milk drinkers should know their cows intimately before making consumer purchases of raw milk.

For example, researchers have discovered that cows on organic dairy farms are healthier and less stressed than conventional cows, largely thanks to a more natural, forage-based diet instead of the grain and ground-up bones that usually pass as cattle feed on factory farms. Raw milk from pasture-fed livestock provides the most benefit, promoting the cultivation of healthy bacteria and some active enzymes that enhance immunity, digestion and nutrient assimilation. So if you drink raw milk, make sure it comes from an organic farm, for your health, safety and the nutrient value. But my next question is, why drink milk at all? There are plenty of equivalent protein sources and certainly better food sources with bioavailable calcium, so why do we need cow's milk?

Is it natural for human beings to consume the milk of another animal? We know raw milk from cows produces much more mucus than human milk. The enzymes in the human stomach also make it difficult for a large portion of the population to digest raw milk especially when it comes to lactase which is deficient in many adults.

The only thing that makes me believe that raw milk is still worthy of consumption is that government policy is so much against it. Anything public officials try and convince us against is usually very good for us and vice-versa. However, that could also be due to the natural competition raw milk offers to the pasteurized milk industry which the government supports...and the higher-ups hate competition.

Governments all around the world support the dairy industry, keeping the media spewing out some fairly ridiculous myths about its health benefits which simply don't exist. If milk keeps bones strong, candy keeps teeth stronger.

No one study has ever conclusively shown that the calcium in milk is more efficiently absorbed that calcium in foods. Intestinal absorption does not necessarily reflect the bioavailability of calcium to the whole organism because calcium must be retained and used in bone formation and mineralization.

There is no doubt that raw milk is a suitable form of calcium. While there is also evidence to suggest the nutritional effectiveness of the calcium provided by raw milk, there is still some debate as to whether this source of calcium is biologically better than other sources, such as calcium salts or certain vegetables.

The dairy industry's fairy tale that pasteurized milk builds strong bones actually has the reverse effect and actually causes osteoporosis. The belief that calcium in milk is what builds strong bones is absolutely ingrained in our society, but has no basis in reality--calcium is but ONE of the many minerals your body needs for building strong bones. The pasteurization process only creates calcium carbonate, which has absolutely no way of entering the cells without a chelating agent. So what the body does is pull the calcium from the bones and other tissues in order to buffer the calcium carbonate in the blood. This process ACTUALLY CAUSES OSTEOPOROSIS. Milk definitively does not do a body good if it's pasteurized.

The United States is the world's largest producer of pasteurized cow milk, but oddly enough it is also one of the world's smallest consumers. The dairy industry thus has a vested interest in eliminating all raw milk suppliers from the market place to enforce and increase per capita consumption of pasteurized milk which is lagging behind most of the world.
Pasteurized milk is perhaps one of the most nutritionally deficient beverages misappropriately labeled as a "perfect food." Raw milk enthusiasts have known for a very long time that unpasteurized milk is the ONLY milk worthy of consumption. Pasteurization destroys enzymes, diminishes vitamin content, denatures fragile milk proteins, destroys vitamins C, B12 and B6, kills beneficial bacteria, promotes pathogens and is associated with allergies, increased tooth decay, colic in infants, growth problems in children, osteoporosis, arthritis, heart disease and cancer.

If Not Cow's Milk, What Milk Should We Drink?

After all, we have to put something in our coffee. First and foremost, don't waste another dime on pasteurized milk. It's not worth your hard earned money and certainly not worth jeopardizing your health. Although I'm not completely adverse to raw cow's milk, there are simply too many people who have trouble digesting it so we must address alternatives for consumers who need a refreshing glass of something white.

You'll have to figure out which milk product works best for you. In my opinion, there are really only two options: Hemp milk and coconut milk. Let me explain why.

Rice milk is grain-based and exposed to high levels of arsenic, and unless you make your own, manufacturers will make sure they get at least one or two emulsifiers which will probably be GMO if not organic. Last choice.

Is made from hemp seeds that are soaked and ground into water, yielding a creamy nutty beverage. It contains 10 essential amino acids and a three-to-one ratio of omega-6 and omega-3 essential fatty acids and other nutrients include magnesium, phytosterols, ascorbic acid, beta-carotene, calcium, fiber, iron, potassium, phosphorus, riboflavin, niacin and thiamin. If you would like some health in glass, this is a great choice and it takes second.

Is from the grated meat of a coconut and probably the tastiest of all milks. The color and rich taste of coconut milk can be attributed to the high oil content which is easily one of the healthiest oils in the world. Most of the fat is saturated fat, but it's this fat that leads to its anti-viral, anti-bacterial and anti-protozoa properties. Coconut oil contains the most lauric acid of any substance on earth.

Compared to cow’s milk it’s easier to digest because the body uses 3 less enzymes for its digestion as opposed to cow’s milk. It also contains a high level of omega 3, 6 and 9 fats along with high amounts of amino acids. This excellent combination of fats and amino acids make it a complete meal in and of itself.

The high level of omega 3, 6 and 9 fats and protein in this milk are more bio-available to humans compared to all other animal fats and most vegetable fats. This bio-availability results in the body’s ability to assimilate all its nutrients.

It’s very healing to the digestive tract and even heals damage done to the system in cases of IBS, Crohn’s disease and severe malnutrition.

For all these reasons, coconut milk is #1 on my list. Please don't be fooled by coconut milk that contains "added flavor" and try to stick to pure sources.

Marco Torres is a research specialist, writer and consumer advocate for healthy lifestyles. He holds degrees in Public Health and Environmental Science and is a professional speaker on topics such as disease prevention, environmental toxins and health policy.